Join us for an afternoon of poetry for a cause!  To reserve your seat simply CLICK HERE and make a $25, or more, donation per person. Your name will be added to our guest list. The book that started it: Praise for “Renegade Pinky”

This fall it will have been 17 years since I first heard the words ‘Parkinson’s disease’ as they pertained to me. The neurologist said something like, “I can’t be sure, but you may have Parkinson’s disease.” To which  I replied, “huh?”

Looking back, the symptoms first appeared about two years earlier. And it would be another year before I was examined by a movement disorder specialist for the final authoritative, “You have Parkinson’s disease.”

Today I am proud to be playing a part in the fight against Parkinson’s disease. As Team Fox members, we will be hosting the 4th annual Poets for Parkinson’s fundraiser. And we’ll be asking friends and family for support. Taking on the challenge of this fundraising endeavor is both exciting and inspiring. I am making a commitment to raise funds and awareness for Parkinson’s disease (PD). I am dedicating my efforts to The Michael J. Fox Foundation because I believe that I am helping to ultimately shorten the road to a cure.

Over five million people worldwide are living with Parkinson’s disease (PD) — a chronic degenerative neurological disorder whose symptoms typically progress from mild tremors to complete physical incapacitation. In the United States, 60,000 new cases of PD will be diagnosed this year alone. While the average age of onset is 60, an estimated five to 10 percent of people with PD experience onset at age 40 or younger.

I’m asking for your support in our race to put an end to PD.  This year our goal is to raise $10,000. Please help me reach my goal by making a contribution now. Donations are tax-deductible to the full extent allowed by law and can be made payable to The Michael J. Fox Foundation for Parkinson’s Research. You can visit my Team Fox fundraising page at http://www2.michaeljfox.org/goto/p4p2016 to make a secure gift online. I invite you to join me in making a difference in the lives of those living with Parkinson’s disease. Thank you.

My sister, Annie Weatherwax will present her her debut novel, All We Had, at the Strand Bookstore on Thursday, August 7,  7:00PM – 8:00PM 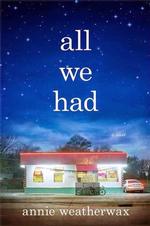 All We Had – Annie Weatherwax

All We Had tells the story of the hardscrabble life of thirteen-year-old Ruthie and her mother, Rita. Ruthie and Rita have never had a stable life, but after many ups and down they have carved out a space for themselves the small town of Fat River. But even as Ruthie hopes that their life has finally gotten back on track, it takes another frightening turn. All We Had has been praised as a “strong, quiet and powerful look at the human heart,” by Kate Alcott.

Join us for an evening of beautiful poetry, fine art, and good eats at the 3rd Annual Poets for Parkinson’s.

http://fundraise.michaeljfox.org/poetsTo reserve your seat simply CLICK HERE and make a $25, or more, donation per person. Your name will be added to our guest list. 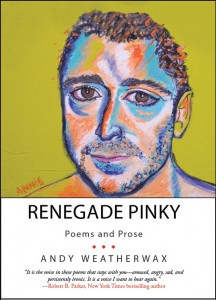 “It is the voice in these poems that stays with you. Amused, angry, sad, and persistently ironic. It is a voice I want to hear again.”
~ Robert B. Parker, New York Times Best Selling Author

“How does the brain change suffering into art? As a neuroscientist, I can’t say, but as a reader, I can report that it has happened. Andy Weatherwax, a polymath who has also produced musical and visual art, here brings his intense appreciation of the sensory world to the experience of illness. The result is transformative.”
~ Alice Flaherty, MD, PhD, Director, Movement Disorders, Mass. General Hospital Author of The Midnight Disease: The Drive to Write, Writer’s Block, and the Creative Brain

“These poems reveal a depth of human spirit the reader will find to be a source of healing.  Andy Weatherwax embraces his Parkinson’s disease as a gift that allows him to love in new ways, to see with new vision, and to live with a sacred purpose.  We see in his verse that he refuses to allow the Parkinson’s to define him.  Each poem bears witness to the quality of life one discovers when one moves beyond fear.  Laced with the language of joy, this collection of Andy’s work inspires us to live fully into each moment.  Wisdom begins when we let ourselves be awed by the Creator.  Andy is a wise human being.”
~ Rev. Richard C. Allen, Senior Minister, The Congregational Church in South Glastonbury, CT, United Church of Christ

“An honest, humorous, and at times, even lyrical, expression of the fragility and resilience of human life unfolding against the background of a greater compassion.”
~ Mark T. Unno, PhD Shin Buddhist priest and scholar, Author of Shingon Refractions: Myoe and the Mantra of Light

“The individual poems in Renegade Pinky are extraordinary.  As a collection, the impact is breathtaking.  These poems are informed by pain, uncertainty and loss; but even as we are brought to profound intimacy with these things, we as well accompany a poet possessing great good humor, an ironic take on life and exquisite sensitivity to the revelations of nature, music, love and everyday realities.  Falling into a gutter, giving vent to anger, letting the words of Billie Holiday speak to him, turning the menace of a subway bully into kinship: such things mark Andy Weatherwax’s days, and we emerge from our time with him aspiring to the deeper, broader, more creative and peace-filled ways of being human that infuse his life.  I dare you to read these poems and not be changed.”

~ Alexandrina Sergio , Author of My Daughter is Drummer in a Rock ‘n Roll Band

Poet Andy Weatherwax reads from the anthology Daring to Repair at a Wising Up Press reading at The Center for the Arts at the Armory in Somerville, MA. 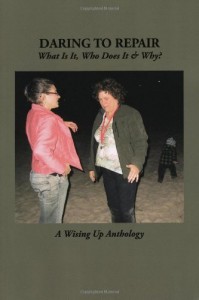 I have four poems in this anthology published by Universal Table/Wising Up Press, a wonderful organization run by two very enthusiastic and passionate people: Heather Tosteson and Charles Brockett. We had a reading at the Center for the Arts at the Armory in Somerville MA in the spring of 2012.

What is repair in relationships? It’s not starting anew. It’s not jumping ship. It’s not settling, either. It takes as many forms as there are relationships. It’s difficult. It matters. It takes both sides to do it-and we do it all the time, in large and small ways. So why don’t we like to talk about it? Why do we tend to think of it as a failure rather than a source of resilience, like the constant re-equilibrations of balance that allow us to walk, dance, break bread and move mountains?

In this intriguing anthology of poetry, memoir, and story, forty-four talented writers ages twenty to eighty explore repair in many forms: between adults and their parents, parents and their children, in romantic relationships, marriage, divorce, bereavement because of the death of a parent, spouse, or grandchild, and in relationship to broader social conditions as well, like poverty, addiction, racism, war, physical differences, disease. With humor, grief, wit, tenderness, honesty, kindness, anger and hope, they invite us to explore-and celebrate-what it takes for all of us to stay connected. This is a book you can find yourself in. This is a book you can share-with a brother, a long lost friend or one you talk with daily, a parent, a child, a colleague, a spouse-and learn something new about them and yourself, growing closer in the process.