Herb Hilgenberg is, among other things, a sailor. From 1967 to 1982, he raced in and won various North American championships.  In 1982, he had an experience that would change is life.

The Hilgenbergs were looking forward to an enjoyable voyage to the Virgin Islands.

The weather forecast indicated a high pressure system would be moving toward the North Carolina coast and bring settled conditions near shore.

As they sailed toward Cape Lookout, N.C., the winds began to increase and thunderstorm clouds appeared from the east.  The winds were at 25 to 35 knots. The North Carolina weather forecast they were monitoring indicated no change to the earlier forecast. Assuming that it was a temporary pattern, the Hilgenbergs sailed on.

The winds steadily increased, and with them the seas. The 39-foot South Bound II was being tossed around in winds blowing 50 to 60 knots and seas reaching 45 feet.

Hilgenberg fractured his arm during the height of the storm, but fortunately he and his family survived, arriving in the Virgin Islands on the 10th day of their trip. 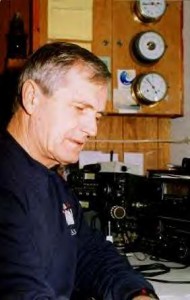 From this turning point in his life, he began a part time hobby in Bermuda; using his single sideband radio to provide weather briefs to mariners crossing the Atlantic, providing weather data to the National Weather Service and passing on updated information to the boating community at large.

In 1994, Herb and his wife, Brigitte, also an advanced amateur radio operator, retired to Burlington, Ontario, their home town, and restarted the Southbound II net. When Southbound II’s daily net opens at 20:00 UTC, a cacophony of radio noise erupts as vessels call in from the Caribbean, along the eastern seaboard and throughout the Atlantic.

Herb provides his interpretation of weather data relevant to each boat, summarizing his opinions so mariners can make educated decisions. For long passages, “Always have a five-day plan” Herb says. If your plan changes, advise Herb as he often worries about those who don’t heed his warnings and waypoints. “If I give a warning and they choose not to go to the waypoint….tell me… then I can give a forecast for where ever you choose to go.”

Herb remembers advising a group of boats between Florida and Bermuda to stay put due to an incoming storm. All but one stopped. Later that night, Herb received a call from the Coast Guard advising that the on-going boat sank, with no survivors. Herb says that it was agonizing to talk to relatives who couldn’t contact the boat; it was a tragedy that needn’t have happened had the boat left its radio on.

Herb updates his powerful equipment at his own cost while providing this free service to all interested mariners, every day, 51 weeks a year. Updated equipment includes one X-B antenna, a horizontal dipole designed in the form of an ‘X’ that is directional for better reception and a vertical antenna, used for a lower frequency or transmitting to the north where he communicates with tugs in Hudson Bay and the Arctic. He can use both via a switch that goes to a second ssb radio and uses two computers; one for satellite through the internet and the other for collecting weather charts and downloads from the internet. But it isn’t just his equipment that gives his information importance – it’s also his 20+ years of experience interpreting that data.

Some of his most rewarding moments come when he receives a call at night from the Coast Guard who’ve received a mayday but can’t get the boat’s position. Herb searches for the mayday on his frequency, makes contact with the boat, co-ordinates transmissions and activities amongst the Coast Guard and commercial boats in the area, and helps to set up a successful rescue.

Herb says that at the end of the day, he and Brigitte, who takes care of all correspondence and occasionally monitors check-ins and responds if need be, are happy to have simply helped people and kept them safe through another day at sea.

Thanks for a good watch, Herb.